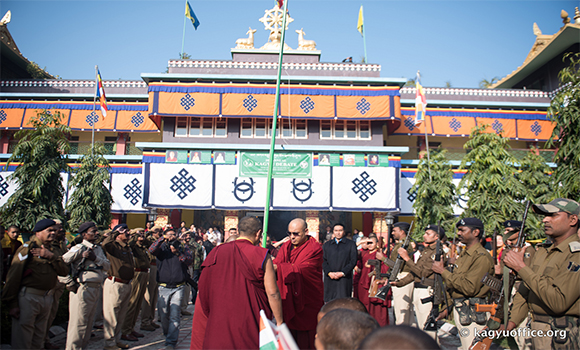 After the Karmapa’s talks on Mikyo Dorje’s text, the ordained sangha engaged for three days in the practice of the Extensive Text of the Activity of the Protector, compiled by the Fifteenth Karmapa, Khakhyap Dorje. Since it is of considerable length, the monks rose at 3am, gathered in the shrine hall at 3:30am, and chanted from early morning to the evening. In speaking of the practice, the Karmapa recalled, “In Tibet, the practice lasted seven days, beginning at 9 in the evening and continuing to 12 noon the next day, and then it started again. Sometimes you did not know if it were day or night.”

Taking an unusual step, the Karmapa appointed the khenpos as the chant masters, so they could learn this role. Khenpo Kelsang Nyima, Dean of the Rumtek Monastic College, became the main chant master and four other khenpos joined him as assistants. Another khenpo became the head of the tea servers for the three days.

On the last day of the ceremony, the Karmapa came from the whole day, starting at 3:30 in the early morning and continuing through to 7:30 at night. On this day as well, he joined all Indians in celebrating their 68th Republic Day. This observance marks the momentous occasion in 1950 when the country’s constitution was adopted to establish India as a democratic republic. In front of the main shrine hall at Tergar Monastery, His Holiness helped to hoist a fluttering Indian flag on a tall pole, which rose from a circle of bright yellow flowers. In attendance were members of the Indian security for the Karmapa and the staffs of the Tsurphu and Tergar Administrations.