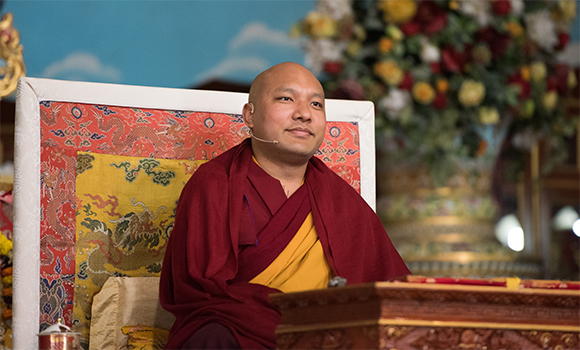 Completing His Teachings, the Gyalwang Karmapa Speaks of the Chakrasamvara Empowerment

The Gyalwang Karmapa finished his teachings for the Winter Debates by giving a reading transmission of the last section of the Three Essential Points, which covered the supplementary instructions on view, meditation, and conduct. This part is long and very subtle so the Karmapa suggested that the translation be uploaded to the kagyuoffice.org site allowing everyone to read and contemplate it. Commenting on the two teachings from Tsembupa and Mitra Yogi, he said this year the teachings were mainly related to Avalokiteshvara and he hoped they had been helpful to people.

The Karmapa then spoke of the protector practice, composed by the Fifteenth Karmapa, Khakhyap Dorje, which will be performed for three days, beginning at 3am in the morning and lasting into the evening. In Tibet, the Karmapa recalled, the practice lasted seven days, beginning at 9 in the evening and continuing to 12 noon, and then started again. Sometimes you did not know if it were day or night. Over the years, for these three days, the khenpos will take turns being the chant masters so that in the future they all will know how to do it.

The Karmapa confessed, there were no plans to give this empowerment, but “This year the teachings from the Torch of True Meaning are on Guru Yoga and in conjunction with it, I had planned to teach the Four Session Guru Yoga. Then I newly received old instructions on the Four Session Guru Yoga, so I took the opportunity to publish the instruction manuals and then had no choice but to give this great empowerment as well. It is very precious and since I’m reluctant to give them, you should not expect to receive great empowerments from me in the future.”

“In general it is not easy to receive these great empowerments,” he continued. “Some people come to me and want to make a Dharma connection through the Secret Mantra Vajrayana, so they ask for this one. When I give this, however, I am not thinking of other people making a Dharma connection with me, but rather that Chakrasamvara is the main yidam for the Karma Kamtsang, and for all Kagyu lineages. He is also one of the sets of five great deities in the practices from the First Karmapa, Dusum Khyenpa.

“The main Kamtsang practice, of course, is Vajra Varahi but this is a very restricted practice and the empowerment should not be given lightly. The Chakrasamvara empowerment is not so restricted, so I thought if we made a Dharma connection through this, that would link to the practice of all the previous Karmapas since I carry the name of the Karmapa. It is also a good way to make a connection with the Secret Mantra Vajrayana, so it is an important occasion.”

“There is one problem, however,” the Karmapa cautioned. “To receive the empowerment, you must make the commitment to do the Four Session Guru Yoga, which is the main guru yoga in the Karma Kamtsang tradition. You could also do any other guru yoga, as each tradition has its guru yoga, such as the Six Session Guru Yoga of the Geluk tradition. Whichever one of them you may choose, the commitment is to do a guru yoga practice every day for the rest of your life.”

With such a big commitment, he remarked, some people might worry, “I don’t know if I can do this practice every day until I die.” However, the Karmapa said, “One should consider it carefully, seeing that there is a great purpose to this special opportunity.” The empowerment will not be webcast, though there’s a slight possibility that people could register and receive it on-line, but that has yet to be decided and it is not at all certain.

In conclusion, the Karmapa explained that he will not be giving the complete four empowerments nor that of the vajra master, which makes it easier since there will be no commitments for mantra repetition or other vows. Of course, there will be the bodhisattva vow and some small samaya commitments, but there is no need to worry about the fourteen root downfalls or mantra recitation. Thus, opening out the perspective of this rare opportunity, the Karmapa ended the teaching sessions for the Winter Debates.