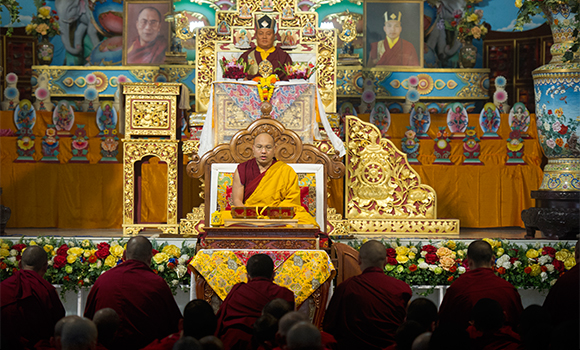 The Law of Karma Cause and Effect is Inescapable – Day 5: Teachings on One Hundred Short Instructions

Hundreds of monks and laypeople packed into the shrine room to listen to the Gyalwang Karmapa continue his transmission of the chapter on Vast and Profound Light: Instructions on the Two Types of Bodhichitta According to the Founders of the Two Traditions . As they waited, they chanted Karmapa Khyenno. Then the sound of the gyalins heralded the Karmapa’s descent from his quarters on the roof of the monastery and an expectant hush fell.

Having prostrated three times, the Karmapa mounted the throne, and after recitation of the prayer requesting the teaching and the short mandala offering, the teachings recommenced.

Yesterday’s focus had been that having realised the priceless opportunity we have in our precious human life, and knowing that this life is impermanent, we should be inspired to practice Dharma wholeheartedly without delay.

Because it is impermanent, everything we see or hear is unreal, like an illusion.

Now the text describes in graphic detail what happens at the time of death. Only Dharma can help, so, once more, we ask the Gurus to bless us so that we may develop devotion for the Gurus and compassion for all beings.

The purpose of these meditations on impermanence is to reverse attachment to this life, and to engender compassion for all those who commit misdeeds.

The text now moves on to the third contemplation of the common preliminary practices: the law of karma, cause and effect. When we are dying, we are powerless, and at that time our karma ripens. Firstly, there are the samsaric results: the karmic consequence of non-virtuous actions is rebirth in the lower realms; that of virtuous actions is rebirth in the higher realms. Then there are the compatible results: for example, because of killing, we will be reborn in a place where our lives will be short, or because of stealing, all our wealth will be stolen and we will be left destitute. The result of sexual misconduct is to be surrounded by enemies in a situation of conflict. As a result of lying we will be criticised or looked down on. Reflecting on this, Mikyö Dorje urges us to develop a fear of the lower realms and an understanding and confidence that karma, cause and result are infallible. This should then spur us on to commit virtuous actions.

The next section considers nirvanic cause and result. Though non-Buddhists can achieve higher realms, they hold a wrong view and inferior refuge, so their actions are mistaken and the result is that they create more suffering for themselves. The true Buddha taught the unmistaken path to supreme enlightenment. The true Dharma is the path which will liberate us from suffering and take us across the ocean of samsara. The Sangha are our companions on the path. As those on lesser paths do not develop bodhichitta, they only achieve a nirvana appropriate to their level, practice and intentions. In contrast, the intelligent bodhisattvas, knowing that all sentient beings have been their parents, view them with unbearable compassion, and cherish others more than themselves.

The text then describes the path of the bodhisattvas which results in Buddhahood.

Reviewing what he had just read, the 17th Karmapa said that there were ten different methods for meditating on impermanence and we should consider all ten of them.

“As I said before on death and impermanence, everything is changing moment by moment, and so we have no time to have either attachment or aversion to such things which change moment by moment.” If we knew that we would be here for a definite length of time, he commented, it might be possible to make plans for the future. But as we have no certainty about what will happen to us, we would be deluding ourselves to think that the future is certain. We do not have time to waste in meaningless activities.

Birth and death co-exist. All phenomena, from the moment they arise, are destined to perish. His Holiness cupped his hands together to illustrate how impossible it is to hold water securely. Inevitably, it will leak out between the fingers in a second or two, without us knowing where it has gone. Our lives are similar, and, without us knowing, we are approaching the time of our death. Thus it is important to think about death now, and meditate on it.

Contemplating death and impermanence, the Karmapa explained, is a means of motivating and inspiring us to practise the Dharma as quickly as we can. Having achieved this precious human body, each second we have this body is a precious moment, because it affords us the opportunity to practice Dharma and work for the benefit of others. If we let even a single moment go, we incur a great loss. If we do not practise these things now, the Karmapa emphasised, we will have wasted our lives

The Karmapa now turned his attention primarily to the Gunchö monks.

The 18th Gunchö is a wonderful opportunity to gather here, he began, and then talked about the reason for the gathering and the importance of the monks understanding its purpose properly.

The Gunchö is primarily Dharma practice. It provides an opportunity for the monks to discuss Dharma and engage in the stages of listening and contemplation of the great scriptures and traditions. They should always remember this is the aim.

“Over the last three years, we have had the debate competition, but if we begin to consider winning the competition as our ultimate aim, we are mistaken. The competition is a tool for accomplishing the actual aim, that first we become monks and then we begin to study,” explained His Holiness.

Debate was a tool to practise the Dharma and deepen their understanding of ideas such as impermanence. However, it was more than an intellectual exercise. The understanding had to become part of their being. The ultimate aim was to reflect on the nature of our minds.

“If we can recite things perfectly but our mindstreams do not become tamer and more peaceful, we have missed the point,” he said.

Human beings often confuse means and ends. Money is a good example. People see money as the ultimate end rather than as a means to achieve other goals. They then become fixated on getting money. “Which is more important? “he asked. “Your life or your money?” We need an unmistaken aim and motivation.

His Holiness then talked a little about the scholarly tradition within the Kagyu. This had existed especially during the time of the 8th and 9th Karmapas. There had once been Kagyu Rabjampas and great monastic colleges. Now, however, the teachings of Tibetan Buddhism as a whole are under threat, and the Karma Kamtsang in particular is in a precarious position.

“We need to remember the great masters of the past and repay their kindness, and also repay the kindness of all beings in the six realms. Hold this in your mind while you do study and discussion,”His Holiness advised the monks.

The session ended with a request from the Karmapa that all the monks join in the nightly recitation of the Four Session Guru Yoga, a tradition which dates back to the Garchen. In those days, the custom was for people to recite the prayer in their tents, and discipline masters would patrol from tent to tent wielding a large stick to punish anyone who had fallen asleep.

Guru Yoga is the most precious and most sacred practice, encompassing all the yidams and protectors, and in the Karma Kamtsang the Four Session Guru Yoga is the primary and most important one.